Beginning in 1976, scholarship awards were given by the Donald S. Kingery Memorial, Inc., and each scholarship recipient received $2000.

FIND OUT HOW TO WIN THIS AWARD

Beginning in 1976, scholarship awards were given by the Donald S. Kingery Memorial, Inc., and each scholarship recipient receives $2000.

In 1986, the Pittsburgh Coal Mining Institute of America (PCMIA) assumed sponsorship of this award program. Scholarship recognition increased to $1,000 in 1986, and up to $2,000 for each recipient beginning in 1987. The scholarship check and certificate are presented at the annual luncheon of the PCMIA which is normally held in late October.

The nomination write-up for this award is limited to the following constraints. The write-up must be submitted on 8.5 x 11 inch paper size, margins shall all be 1-inch, spacing shall be single or double-spaced, the font used shall be Times New Roman, 12 point, and the total number of pages shall be no more than 1 single-sided page (excluding the cover sheet). The cover sheet shall include only the following: Name of Nominee, Current Position or Title, Business Address, Home Address, Email Address, Office Telephone Number, Name or Person Submitting Nomination, Address, Email Address, Office Telephone Number, and date the nomination was submitted.

Any nomination exceeding the overall page limit may not be evaluated by the PCMIA Awards Committee. The nomination materials should also include a high resolution (approximately 1 MB or greater) color electronic photograph of the nominee. This photograph will be used for publicity purposes.

Please submit one set of nomination materials. It is not necessary to make additional copies.

Or electronically to: Lisa Krepps at Krepps.Lisa@dol.gov

For questions or more information, please contact Awards Committee Chairperson Michael A. Trevits at 412-874-6556 or mat412@verizon.net

CRITERIA ON WHICH AWARD IS GRANTED

Nominees must: (1) be a Junior or higher level undergraduate in Mining Engineering; (2) be in need of funds to continue education; and (3) have a scholastic record and interest in mining sufficient for reasonable assurance that the recipient will graduate as a mining engineer. Other factors considered are scholastic standing and mining experience

The PCMIA Awards Committee solicits nominations for this award from the mining department chairpersons in early September of each calendar year. Nominations for the award may be made through September 30th of any given year.

Upon review of all active submissions for the award, the PCMIA Awards Committee will recommend a nominee to the PCMIA Board of Directors for approval. Upon approval, the successful nominee (and Department Chairperson) will be notified by late September. The award is presented at the annual luncheon of the PCMIA which is normally held in late October of each year.It is tradition that the recipient attends the PCMIA luncheon to receive the award. 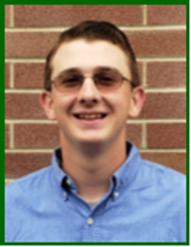 Daniel S. Ausherman is a student in the Statler College of Engineering and Mineral Resources at West Virginia University. Daniel is pursuing a Bachelor of Science degree in Mining Engineering and is also enrolled in WVU Honors College with a projected graduation in the Spring of 2020. Daniel currently has a 3.25 GPA. Daniel holds a West Virginia Underground Apprentice Miner Card.

In the Summer of 2018, Daniel served as a Production Intern for Alliance Resource Partners at the Tunnel Ridge Mine. He worked on 3-entry, longwall gate development, continuous miner section and assisted with longwall panel setup prior to a move. He also completed ventilation fan maintenance, monthly power checks, bearing lubrication, bearing oil samples, and the removal of silencer units on the fans. Daniel also did a variety of jobs including extended periods of longwall maintenance, and aided the track department laying rail, analyzed optimal configurations for rail and switch installation and fixed and replaced damaged rail and conducted track maintenance. He worked in the Engineering Office with the underground surveyors setting spads and updated mine maps and conducted progress checks on air shaft work and site work at a new portal.

Daniel also has worked from 2015 to the present as a Volunteer Fire Fighter at the Smithsburg, MD Community Volunteer Fire Company. Here, he responded to medical situations, automobile accidents and fire scenes. He served on numerous committees, including Carnival, Car Show, and Security Committees. He also organized fundraising efforts to update apparatus and equipment, bettering the department’s ability to serve the community.

Daniel is a student member of SME and has participated in numerous outreach events to recruit potential students interested in mining engineering. Daniel was a member of the Future Business Leaders of America from 2014 to 2016 and competed in different business competitions at the Regional and State Level. He achieved first place in regional and forth place in state competitions for entrepreneurship in the Spring of 2015. He served as Chapter President during the 2015-2016 school year and served as a State Voting Delegate 2014-2016.

Daniel was a recipient of the Eagle Scout Award in December, 2016 and was also inducted into the Order of The Arrow, the Boy Scouts of America’s National Honor Society that promotes Scouting ideals, especially selfless leadership to help others, as lifelong values.


Historical Listing of the Awardees

Back to Main Scholarships page